Friday, November 23, 2018
With the app Classcraft, teacher and web developer Shawn Young aimed to create a motivational tool that spoke the same language as students: Using the well-known conventions of video games, he has transformed the educational sector around the world.

Although he was successful in an academic sense, Shawn Young had a difficult time in school as a teenager. That may be the reason he wanted create something that would bring new meaning to education for young people. In his view, learning can only happen when it is filtered through a culture that reflects the interests of students. “It came to me all of a sudden. My idea was that I could use the mechanics of video games to motivate young people and help them succeed,” Young explains. It should be said that Young definitely knows what he’s talking about. For close to 10 years, the teacher by profession also led a double life as a web developer. Shawn Young runs his own interactive web development company in Sherbrooke, while his brother. Devin Young, is a designer in New York. It was logical that they would start working together. “I was teaching physics to high school seniors during the week, then Fridays I would fly to New York to do consulting for big brands like Chanel,” he explains. “It was a bit surreal.” 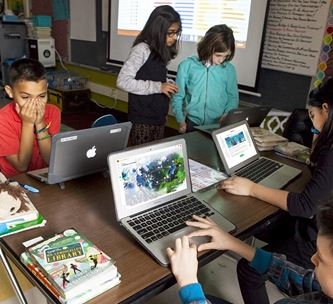 In January of 2013, he created the first version of what would soon become Classcraft after having led a pilot project to test the idea amongst his students. The site received over 130,000 visits every week. Young soon found himself being contacted by international media outlets like the BBC and receiving hundreds of emails from teachers. “Before I even had a really solid idea of the project in my head, I quickly realized that I had found something important.” The two brothers created their company in November of 2013 and asked their father, Lauren Young, to help them out by lending his experience in management, human resources and finance. While the initial idea may have been Shawn’s, the platform owes its success to the work of all three family members.

The Classcraft program is accessible from any web browser—its objective is to transform the classroom experience through the use of an interactive game. Led by the game master, which is the teacher, students form teams of wizards, warriors and healers, with each player having a unique power. The more they succeed in class—not just in an academic sense, but also by helping their peers—the more points they win, which translates into actual advantages such as having an extra day to complete an assignment or the right to eat during class.

And it works! Today, Classcraft has attracted over five million students around the world who are drawn to its gamification approach using the conventions of video games. The objective isn’t to change what the students are learning, but the way in which they learn it. “The goal is to create experiences and to encourage students to try to attain higher educational goals, more than simply acquiring new understandings of math or French,” states Young. “The problems you encounter in the educational milieu come more from human factors—a lack of student motivation or access to resources, or social or emotional developmental disorders. In our opinion, these problems derive from the fact that students often don’t want to be in school. Our mission is to create a positive environment so that they are happy to be there and want to learn.”

“We can intervene on a number of different levels, from fighting against bullying to behaviour management. Through the gaming environment we have been able to mobilize young people and motivate them to succeed.”

The success of Classcraft rests in part on Young’s undeniable expertise gleaned from his experience in school environments. “That’s what has allowed us to better understand the peculiarities of the market and the needs of our target,” explains Young, whose master’s thesis was on the use of digital platforms and who also was an academic advisor and lecturer at the Université de Sherbrooke. Unsurprisingly, his team is similarly composed of people looking to make a positive impact on teaching. The spirit of teamwork is fundamental to Classcraft, and Young believes it is also an essential trait amongst those working to develop the software. “Our values and internal code of ethics are the same as those in the game we develop. That consistency is fundamental to us.”

Classcraft works closely with schools and school boards around the world, everywhere from the United States to Spain. The project represents a great opportunity to open up new markets while adapting the product to local realities. One of the special features of Classcraft is its access to data generated by the game, which allows an overall portrait of today’s learning environment to be generated in real time. It’s a valuable  source of information for teachers and administrators who need to be able to make informed decisions in school management. “Our measure for success is simple. Students write to us to tell us how much we’ve helped them get out of difficult periods, that they’ve made new friends thanks to Classcraft. That’s truly my biggest source of pride,” says Young. “Being an entrepreneur in education is doubly challenging. But I chose to take it on because I believe in the work we’re doing and because we can see tangible results from what we’ve created.”